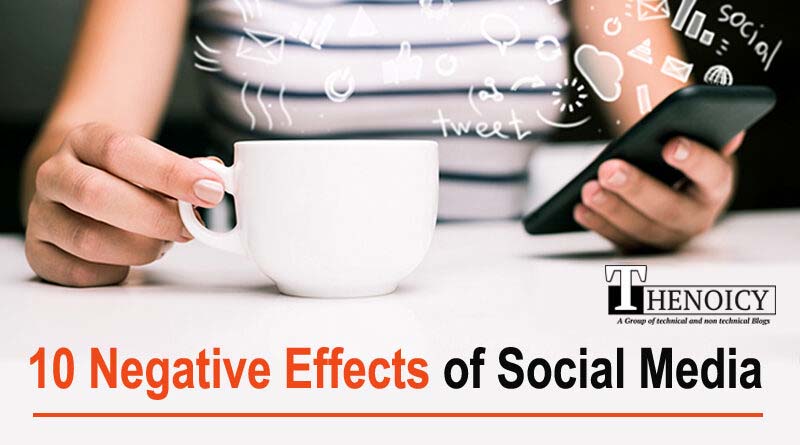 You may be shocked to hear that social media’s negative effects can influence both physical well as mental health.

Though the internet-based life contains some of the major constructive outcomes. Thus, a person cannot ignore these great deals in the disadvantage section.

However, it is always good to learn the time that you spend on social media. Doing this will help you to avoid 10 Social media’s negative effects on your mental health.  Also, it may be quite ideal to utilize social media inside and out occasionally.

Here, in this article, we have listed some 10 Negative effects of Social media on students. There are numerous concerns regarding social media as it can lead to negative feelings like Depression, Anxiety, loneliness, lack of sleep, Negative experiences like cyber-bullying. Also Read: social media in Hindi

Do you spend maximum hours per day browsing Social media? While spending too much time on social networking sites could adversely affect your mood.

Most chronic users are more likely to report their poor mental health conditions. It includes symptoms of anxiety and depression. Well, it doesn’t take much time in trying to figure out why as social media lets you carefully select the best part of everyone’s lives. While comparing yourself to other people is surely a path that leads to anxiety and social media has made it much easier.

So how do you use social mode without causing yourself distress? As per the research, the amount of time that you should spend on social networks is around half an hour per day. Also, with any other potential ills, it’s all about moderation.

Another term for Fear of Missing Out is (FOMO). This phenomenon was born around the same time as social media started rising. Of course, it is one of the most widespread negative effects of social media on society.

The term FOMO is just what it sounds like: a form of anxiety that you get when you are scared of missing the positive experience in your life. Like for example, you might constantly check for your messages, or focus on your Instagram feed all day.

Usually, this fear receives constant fuel from what you see on social media. With the increased social network use there is a better chance to see that someone is having extra fun than you. And that exactly causes FOMO or Fear of missing out.

Today, social media makes it much easier to meet new people and make new friends. It also enables cruel people to tear into others with minimum effort. The people who keep on bullying can use the anonymity on social media networks for gaining people’s trust and then start terrorizing them in front of their peers.

People also start creating fake profiles and start acting friendly, then, later on, betray and embarrass them online. Due to all these online attacks, they are left with deep mental scars. Most people commit suicide in some circumstances. Cyber-bullying doesn’t affect only kids but adults can also become victims of online abuse.

Since the screens hide their faces, but no one wants to end up being a jerk on Social media. So better to take care of yourself and spend less time on Social media platforms.

As most people have been familiar now that social media forms unrealistic expectations of either life or friendships in our minds. There are many social media sites that lack online authenticity.

One of the simple ways by getting out of this mess is to minimize your presence on social media platforms. But, unfortunately, this is not going to happen anytime soon.

While talking about Instagram celebrities, if you look at the popular Instagram accounts then you will find extra-ordinary beautiful people wearing expensive clothes on their perfectly shaped bodies.

Nowadays, body image has become a major concern for everyone. While seeing so many people who are supposedly perfect on daily basis can surely make you conscious about how you look different from others. Obviously, not everyone comes to healthy conclusions in their situation.

Well, it is really important to remember that everyone is human and no one wakes up every day looking like a supermodel. The people who are in search of gaining fame on social media platforms have surely taken unhealthy routes to appear more attractive and beautiful from the rest of others. So better to surround yourself with the people who love you for whom you are and won’t take much stress about Instagram beauty.

Social media can generally be more addictive than cigarettes and alcohol. It has the power to drive people crazy all the time even not thinking about it. If you are not sure whether you are addicted to social networks then try to remember the last time when you spent your whole day without visiting your social media accounts.

Do you feel annoyed or rejected when someone follows you?  What if you wake up and find that your favorite social media platform has completely disappeared? Would this make you feel empty and depressed? Think Wisely!

At the end of the day, social media keeps you away from other activities and wants to keep you scrolling so that they can show you lots of ads and make more and more money. Due to the attention economy, all the social media platforms need your eyes on them as long as possible.

Another negative effect of social media is the lack of sleep. While spending too much time on any social media platform can lead you towards anxiety and depression. The next disadvantage of it is the disturbance in your sleep quality as per the various studies have suggested.

8: Creates a barrier in Clear Communication:

Undoubtedly, social media is great and because of it, we can make friends by using these online portals. However, it is important to remember that making friends and maintaining a healthy friendship is two different parts. We speak indirectly to others on social media and thus it creates a barrier to clear communication.

Sometimes social media can usually be more addictive than liquor and cigarettes. It consists of an amazing draw for the individuals that prompt to check it all the time without pondering it. You can also try to know whether you are too dependent on the internet or not.

Today stress has become very high on people who regularly make use of social media platforms like Facebook, Instagram, or Twitter. Remember that your mental health can have a direct impact on your career and professional life.

1. What are the negative effects of social media on students?

Spending a lot of hours on social media can have negative effects on students such as:

Social media can have negative effects on the behavior of a person. Most chronic users are more likely to report their poor mental health conditions. It includes symptoms of anxiety and depression. Well, it doesn’t take much time in trying to figure out why as social media lets you carefully select the best part of everyone’s lives. While comparing yourself to other people is surely a path that leads to anxiety and social media has made it much easier.

3. What effects does social media have on society?